Gunkanjima is the queen of all the ruins in Japan. I didn’t know I would be going there that soon but the past week-ends were so amazing, filled-up with crazy adventures… I had to end 2010 beautifully with this fabulous place.

[bs_notification type=”info”]Update! Since 2010, I went back to the island a few times and I wrote more articles about it with much better quality photos. You can check my summary article here: Gunkanjima: Stories & Photos. This first article was written strictly from an urbex point of view and since then my feelings towards the island changed.[/quote]

Coal was found on Hashima Island,the tiny island located a few kilometers away from Nagasaki. The island was bought by Mitsubishi, who started its exploitation. The company installs the necessary infrastructure and ask workers to come and live on this island, along with their family. A lot of them actually died of malnutrition, karoshi (death from overwork) and other sicknesses or accidents in the mine… and some of them even choose to thrown themselves out of the windows to end this miserous life. A living hell it seemed. Later on,  the nuclear bomb on Nagaski in 1945 made the situation even worse. The windows on Hashima Island all explose but the workers could not stop working, for the reconstruction of Japan. 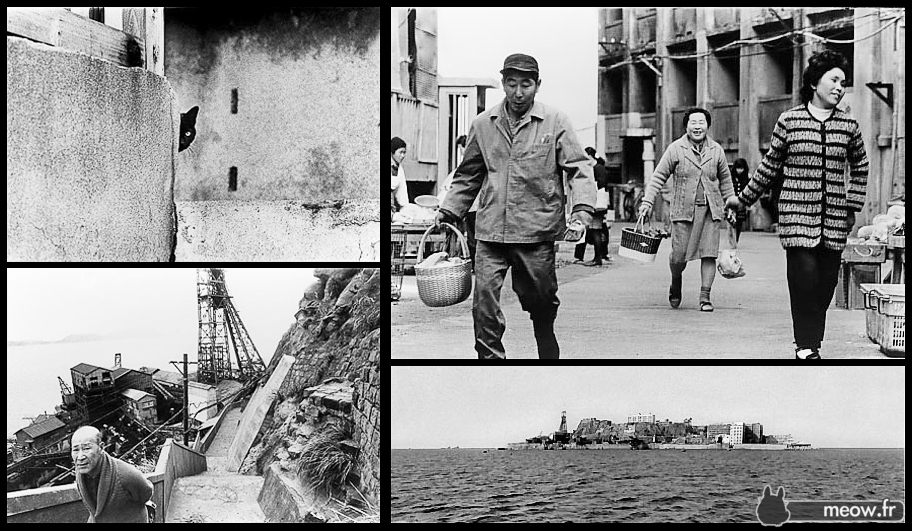 Hashima Island became a real megalopolis : 5,300 habitants (84,100 habitants / km2!), which is, at that moment, the highest density of population in the world. The land of the island is completely urbanized. Apartment buildings, of course, but also two schools, a hospital, a gymnasium, a movie theater, 25 shops, a temple, a pachinko, many bars, end even… a prostitute place. The whole thing is plunged in a maze of stairs and corridors so dense that they even block the sunlight. Hashima Island produces a very high quality type of coal, which helps Japan to sustain its economical growth.

Oil comes to completely replace the coal, and the mine has to be closed down. On April 20th 1974, the last inhabitant left the island. Eventually Hashima Island became the highly ranked Gunkanjima Ghost Island. We arrived at Gunkanjima on a  beautiful autumn day. The first question to ask is: Hashima Island or Gukanjima? Why are there two names? Gunkanjima means “The Battle Ship Island”. It’s an unofficial name, but way more used than its official one. It comes from the way the island looks. A little temple can be seen at the top of the island, and next to it was the residence of the boss, the only wooden house on the island before its demolition. Since it was abandoned, the island is strictly forbidden. Only a few fisherman have been granted access in order to be able to fish around it peacefully. However, derogation is sometimes given to journalists or movies staff… and of course, some sneaky people also go there without asking! Oh, by the way, we’re not on Gunkanjima yet. Just cruising around it with a boat that refused to let us landing on the island, but accepted for a very fair price to take us around it. Luckily, after this little tour, we found a way to get on the island ! It’s arranged for the next morning, before the sun rises. We got on the little boat. As soon as we left the coast, our driver shut down all the lights. The reason of  course is to travel unnoticed. Excitation is getting higher. And we can recognize Gunkanjima even in the total darkness. The captain asked us to jump quickly on the island, from the bow of the boat and he will be back in one hour top, and we’ll have to wait for him, hidden behind the wall. Roger that Captain! We’re on the island, finally. It’s really dark, and to take pictures will be difficult. The idea is to go around the island first, and that should be easy. An former miner said that to cross the island didn’t even take the time of a cigarette. But it was not easy to move around. Many buildings are collapsed, and the floor is covered with wood pieces, scrap iron and random objects with no shape to them anymore. We must be agile and vigilant. We passed quickly though the apartment buildings area to the mine side. The residential zone is more interesting, but it is better to leave it for the end. The light would be better. There is nothing much left of the actual mine. It was probably completely demolished by Mitsubishi when the island was abandoned.

The public baths of Gunkanjima were here. They were probably surrounded by walls before, but now they have a direct view on Nagasaki coast. Further down, there is the new “Observation Deck” where the official tourists can now go (since April 2009). They cannot go anywhere else though, it’s a rather limited visit. Let’s go back to the residential area now. The place is incredible, it seems like we’ve been thrown in the Metropolis movie. It’s an incredible maze, in which we completely abandon ourselves…

I’d like to have the leisure of visiting each building, each room, to install my tripod and to take beautiful shots… but each glance at the watch is as hurtful as a razor cut: there is no time! The truth is that it is also too easy to get lost here. It’s not straight forward from one place to another, not only because of the garbage but also because the island’s configuration is nothing ordinary. And our only chance to go back to the normal world is that boat… which is coming in only half an hour from now on. We had to take steep passages, and ended up at the top of one building. We have to find a way to go down quickly, as we’re running out of time. The stairs over there looks dangerous, but might be the only way. The inhabitants of Gunkanjima had 3 months to leave the place in 1974. Therefore, only a very few objects can still be found. For instance, this old TV looking screen (or is it a game console?). From the balcony, one can look at his neighbors easily. A paradise for peeping-toms, a nightmare for the others ! The place is completely trashed. And we don’t feel really secured here. But don’t worry, after all it is a very quiet and calm day, and Gunkanjima have seen numerous typhoons, tsunamis and even an atomic bomb in the past. So yeah, it is not like something is going to happen now, or is it? The Stairway to Hell (地獄段) is used to access the little temple on the top of the island. It is said that it was so steep that it seemed… hellish ! The buildings on those pictures are all from 1918, and were at this time the main apartment buildings on this island. Of course that was before the construction of the famous Block 65. The architecture of Gunkanjima is really interesting. Most of the buildings are connected by footbridges. A futuristic vision, but gloomy at the same time. The Block 65 (65棟) is by far the most impressive building on Gunkanjima, and it alone makes the whole trip worthwhile. Built in 1945, it is 9 stories high and contains 317 apartments. The plants  in the middle was not there to begin with, as Gunkanjima was famous for not having any kind of green at all. This gives the name of a movie filmed here: Midori Naki Shima (緑なき島,The Greenless Island) in 1948. A ghostly Totoro who nourishes the most troubling myths of Japan in the 21st Century lives here. Watch out at this infamous creature. Don’t look at this picture too longotherwise it will tear up your eyes. The Block 65 looks like a cemetery of haunted houses, pilled-up on top of each other…

Here is a forgotten poem on the wall, which I will try to translate.

Time has passed,
And time decayed the it.
This island is now rotten,
And never will it came back to life.

From the hospital, we have a direct view on the playground of the school. Ah, youth. The good old times. Unconsciousness. Health. Happiness. Everything was so easy and so great back in time. The operating hall of the hospital. Perfect time and perfect place to leave a “geocache” on the chair, in the back. Will anybody else sign it one day? The Block 65 (on the right) is actually very close to the high school (just a bit behind on the left). A moon croissant is blinking between the buildings… The picture on the left represents the end of year ceremony. It seems there were not many people anymore.

Here it is, welcome at Gunkanjima high-school ! It’s actually quite a recent building : it was finished in 1958, and it the last building that was built on Gunkanjima ever again. In the past, this place must have been so noisy, so full of life. The effervescence during the breaks in the playground, with the non-stop loud noises of activities in the mine, and the “city center” is just close by as well… Now, only the wind riding through the buildings is disturbing the deadly silence.

The inside of the high school is a bit sad. But it is only the second floor, so maybe there are more surprises higher-up? I don’t believe so though. I’m now counting the minutes left, and I don’t have more time to check. We are going back to the place where we were supposed to wait for our captain. We can already see the boat, coming to us. That only gives me 2 or 3 more minutes… I take a last picture, while the sun is rising and shed light on the Block 65. The ocean is more active now, and we can see many boats around (fisherman and tourists). Yeah, that’s not good. It is 7.30. We must go now.

This little mosaic seems to say “Thank you for your visit. Looking forward to seeing you again.” Well. We will see about that! The boat bumps quietly against the wall, and without any hesitation, we jump aboard. Very quick, but mission completed. Immediately, the boat turns and accelerates. We must leave fast. The captain receives at the same time a call from the coastline’s guard. He gives us a sign to hide ourselves lower to the wet smelly floor of the boat, a bit scary that was. At the end, we get back on the mainland safely, full of joy. Even the captain seems so happy and for the first time, really starts to talk cheerfully with us ! An unforgettable moment. Wow, we made it! For more information about the “geocache” I left on Gunkanjima, have a look here : GC2JX0Q ! For those who are asking, geocaching is an activity consisting in seeking or hiding caches containing a little register of the visits.

About the old black and white pictures, they’re all from Yuji Saiga. They were taken in 1974, during the last 3 months of activity of the island. Please check his website, it’s awesome.

I went back to the island many times since then. Don’t miss the post about it: Gunkanjima: 10 Stories, 200 Photos.