Fuchu Abandoned US Air Force Base

But then I was still hesitating, weighing my judgments. Jing took the initiative and jumped on the fence like a cat on the run! Surprised, I followed without taking a second look behind. After a short dash, we are safe hidden in the branches. Catching our breath, now it is time to check in our location on Facebook.

Can you imagine abandoned military bases found in the heavy populated Tokyo are? You better say yes, because there are in fact many of them! And one of them has something peculiar: two gigantic parabolic antennas! It is then very hard to refrain oneself not to give it a peek and find out more about it.

We went around the area for a few times, but the base is well protected. There are sharp and tall fences all around and no weak point can be found at all; there are guards patrolling on quite a few spots. It is located right in the middle of a residential area, where the residences are constantly checking if something is trespassing (warning papers from them can be seen everywhere). And on top of that, there are a few cars going in and out from time to time, guarding the communication tower inside which is still in use. No condition favors us at all.

Here we have a map of the entire base. The abandoned section on the top, but you can see in red the communication tower still active and in use, by USFJ (US Forces Japan). The parabolic antennas are just above it (the two grey rectangular borders to the top).

Fuchu Abandoned military base is surely the craziest haikyo to infiltrate: Dangerous, because it is a military area tightly surrounded rusted barriers; and Difficult because even after you got inside, you are still under the direct surveillance of both the guards and the Fuchu citizens (some residence even set up tripods to support the security). Inevitably, there must be a fun side in catching the “bandits”. But then I was still hesitating, weighing my judgments. Jing took the initiative and jumped on the fence like a cat on the run! Surprised, I followed without taking a second look behind. After a short dash, we are safe hidden in the branches. Catching our breath, now it is time to check in our location on Facebook.

It seems like we were not spotted. Good! Now we are moving towards a building which had the look of a dormitory for the American soldiers.

The rooms are indeed very simple but fully covered with graffiti, which added some flavor for this haikyo: the place has nothing special, but its military background together with these drawings on the wall did create some interesting ambiance. Although inside a building, we can still feel tense in the air, as if someone is watching us. We try to be careful enough not to make too much noise. 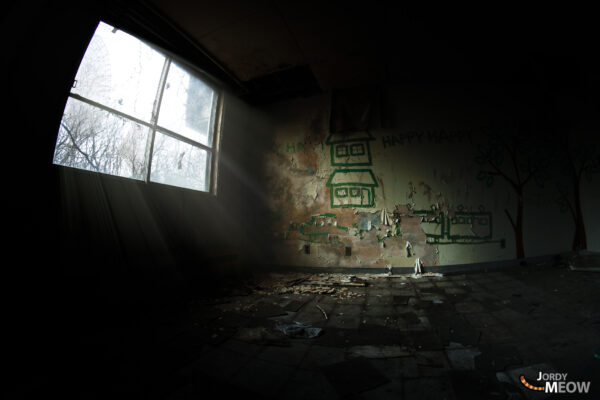 The largest prison in Japan is also located in Fuchu, not far from where we are. It is quite reassuring. In the end if we get caught, at least there would not be much walking. This building is very close to the antennas. Maybe this is we will find the communication facilities?

No, apparently it is still a kind of dormitory. The military base was actually used for Tokyo Olympics in 1964, but which part of it? Were the athletes living right next to the still working parabolic dishes?

This building turns out to be a playground of graffiti artist, the room was filled with “C” men using traditional and modern toilets. The only one that stand out is the one at the entrance (above), being the only one with hair and the letter “W”. Who or what do they represent?

The first floor showed different graffiti style, constructed by a simple elements, but never the less inquisitive. It would be interesting to know what these drawings really mean.

It then goes down with these funny little monkeys one after another, playing with the same small strange object from above. Very good job, painter!

We are out of the building now, and the first thing we noticed was a parked car, and later a guard who is obviously looking for intruders. We must have been caught by some neighbors! The guard seems to be looking around the satellite dishes, where the communications center is located. Bother! It is better to retreat now. Then in less than five minutes later, we are out of the base! Slightly injured by spiky wires on the fence, but nothing major.

The adventure can not just end like that. And a little while later, Jing motivated me to go back alone: it seems easier to go solo. So here we go, back in the base again!

Without hesitation this time, I headed directly to the two big things, where the communication center locates. It is really in the bush! Here is one of the parabolic dish, under the blue sky. I’d love to climb up, but I think I’ll play it safe this time and go straight to the destination.

There we are! The control room for the gigantic parabolic antennas. This section of the military base is part of the “Communication Group” of the US 5th Air Force. It has been active for only a short period (1956 – 1973) but has contributed greatly to the communication of U.S. Air Force during the first part of the Vietnam War. “Decryption and Autovon” (U.S. “survival” telephone system in case of a nuclear attack) is what achieved the magic of the place.

The photo below shows the power (and signal amplifier) of those giant satellite dishes. The one at the bottom is probably the switch(es) used to trigger communications. But I may be wrong, of course, these are purely assumptions.

In this place there are also two offices, with documents related to the parabolic dishes, consists of explanatory diagrams, logs. And there are also some manga to kill time.

The waves were balanced and received in the troposphere (layer of the atmosphere with an average altitude of 11km) to avoid being limitation of  the”visual field”. The communications center was part of “Japan Tropo Scatter System”.

As a result, the system allows the radio communication through very few terminals between Okinawa and northern Japan.

If you are interested in communication systems, the base of Misawa has a AN/FLR-9. It is a circular array of antennas capable of detecting HF communications that were taking place anywhere on the “Iron Horse” (name of the global network)! The FLR-9 is basically the secret backdoor for trojan horse during the Cold War, Fantastic!

I would take more pictures, but I’m all alone in the middle of an abandoned military base and I am hearing noises everywhere. Surely it must be the crows, but this thought does not make me relaxed at all. I then decide to wrap up and go home. Soon I found myself behind the iron fence, half hidden. But as I was about to climb up, a dog sold me out! I  immediately and moved around the wall. Jing sent me an SMS: “Do not move! The guy and his dog are right next to you”. For five long minutes, it seems the dog has got bored of me. They took a few steps, but only a very short distance. Without a better choice I simply climbed up quickly without hesitation. Then I walked off as if nothing had ever happened.

feeling of accomplishment: after Gunkanjima and Nara Dreamland, this has been the place that attracted me the most! During the day I really have doubted the possibility of this intruding, but now it is safely done.

Sometimes, I received old photos and stories from that time and I would like to share it with you here.

I am here in blue uniform talking with Sgt James May who is doing an annual quality control test on a transatlantic voice circuit between Fuchu AS, Japan, and San Luis Obispo,  California.  The two parabolic dishes are Tropo Dishes.  I was on my way down from the top of the 350 ft Microwave Tower when I took one of the photos. Fuchu was my first duty station, my first overseas tour of duty and I fell in love with Japan and the people of Japan.

I was in a housing complex called Kanto Mura about a mile away from Fuchu from 69-73 and most of our dads worked either at Fuchu or commuted farther to Yakota and Tachikawa west on the Chuo line. We all had access to dads cameras. I had a Asahi Pentax Spotmatic. My friends had Minoltas, Nikons and Canons as well as a split frame Olympus. Chemicals were free in the rec services and all we had to do was buy paper. We also swapped music via reel to reel in the rec services there.