It’s early morning in Okinawa and the sky is already ocean blue. Without any hesitation, we jump right away in the first boat direction the paradise: the Taketomi Island!

It’s early morning in Okinawa and the sky is already ocean blue. Without any hesitation, we jump right away in the first boat direction the paradise: the Taketomi Island! It’s only 10 minutes travel from Ishigaki Island. This little island (300 residents only) survives exclusively thanks to tourism. In November, the number of residents is the same as the number of tourists! And that’s actually… a luck. Today it seems most of the tourists are on beach or touring using the “Buffalo Tours”. I am grateful: the streets are all left to me and are really peaceful. Heaven this is! 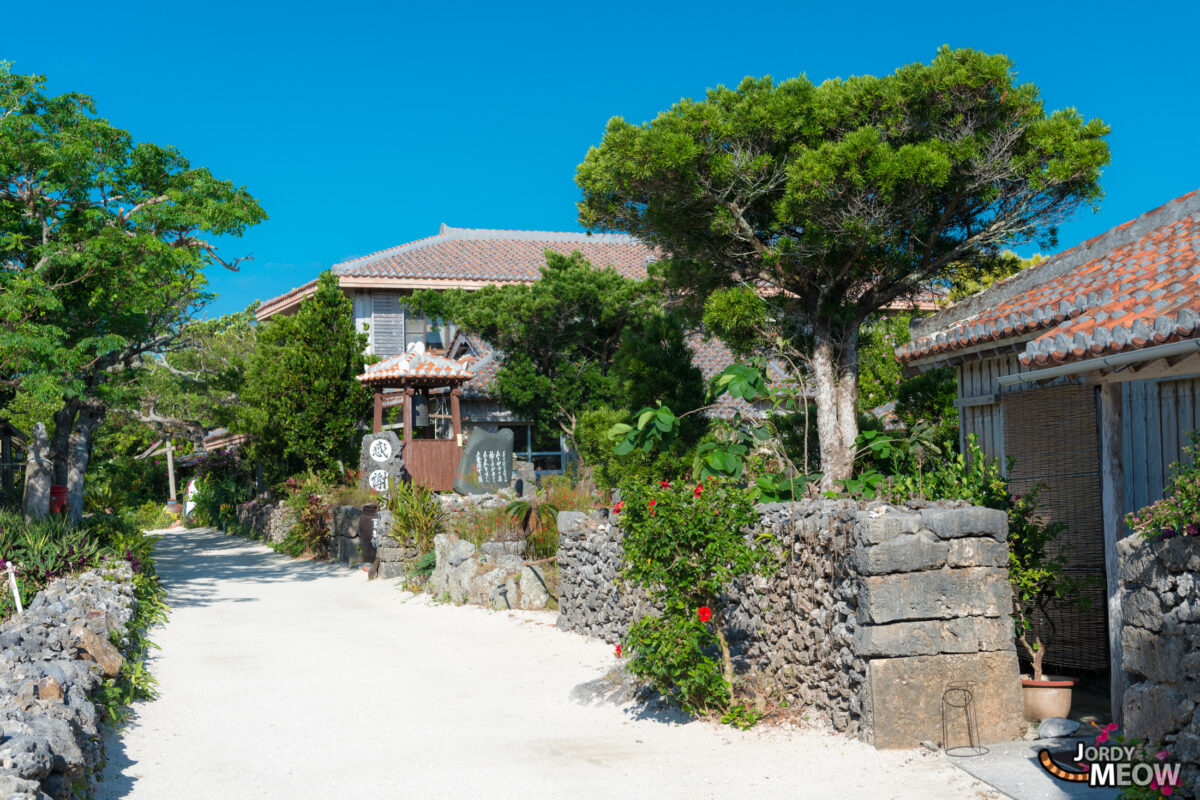 In reality, Taketomi is the name of the village in the center of the island. It’s all made of sand path and little stone walls, all very sweet. The houses are typical of the Kingdom of Ryukyu and carefully maintained. It’s a delight for the eyes, especially with the blooming bougainvilleas. 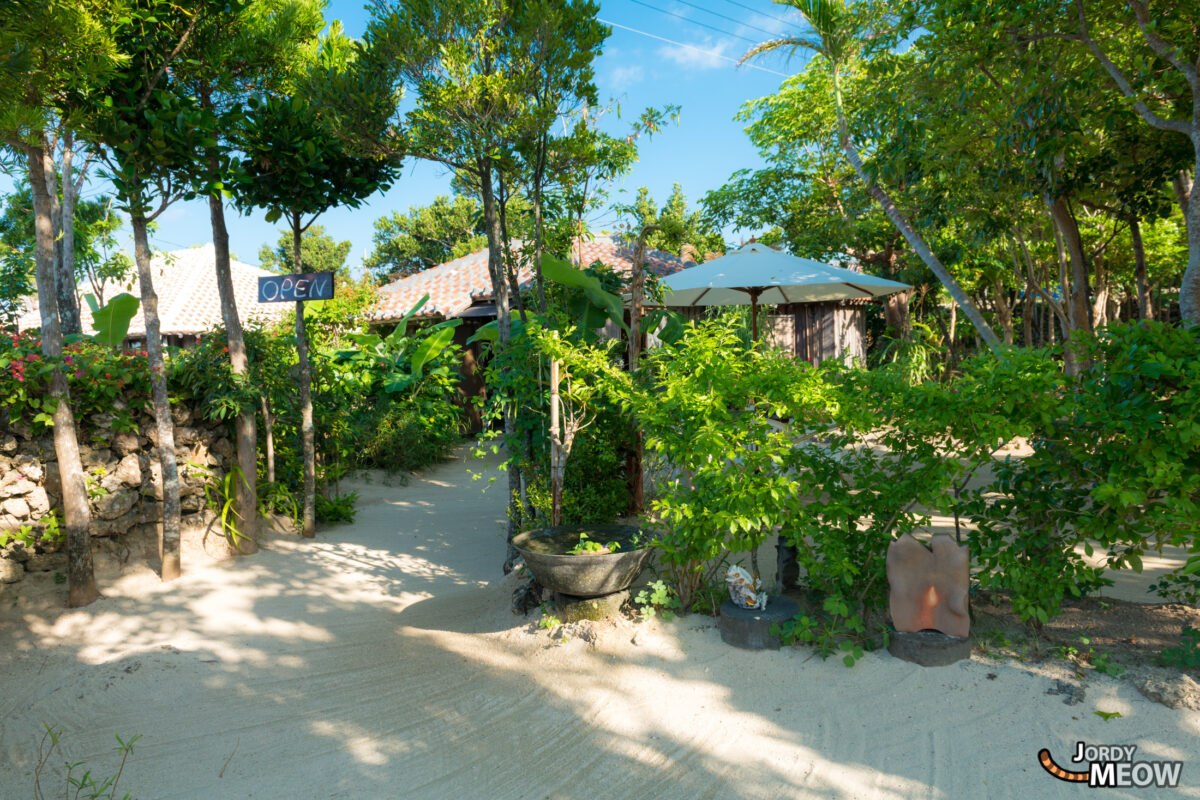 Have you notice the two little cute things in one of the photos above? Those are Shisas. They are everywhere on Taketomi. The Shisas are some kind of mix between lions and dogs. In Okinawa, they protect the house against evil spirits. They are more fun that our equivalents, crucifix, holy waters and others! But what’s their story? In Naha Bay, the Mandanbashi Village was always attacked by a Sea Dragon. He was eating the residents and had a wonderful happy-hellish time destroying everything. One day, when the King was around, the local priestess sent him a boy with a message. The Sea Dragon attack is imminent but the King owns special item to get rid of it: a necklace, present of a Chinese emissary, that he always keeps under his clothes. And this necklace has a small figurine: a Shisa. . The king, however, doesn’t take this message seriously. The little boy has therefore no choice: he undressed him and ran to the cliff with the precious necklace. He waited the Sea Dragon there and when it finally arrived, he raised the little Shisa figurine up in the air. Right away, it started roaring with a phenomenal strength! Gigantic stones felt from the sky right on the tail of the dragon, blocking him. Not being able to move, he then died slowly. The village was saved. Ever since, the grass, plants and even trees have grown where the stones are. You can still see it near the Ohashi Bridge. This has to be said but nobody actually knows the real story for sure. But people are certain of one thing: it is the Chinese Shisa that got rid of this cumbersome monster, somehow. Now, Shisas are everywhere in Okinawa. On Taketomi, they are almost on the roof of every single house, protecting the people. But isn’t it because they are actually so cute? 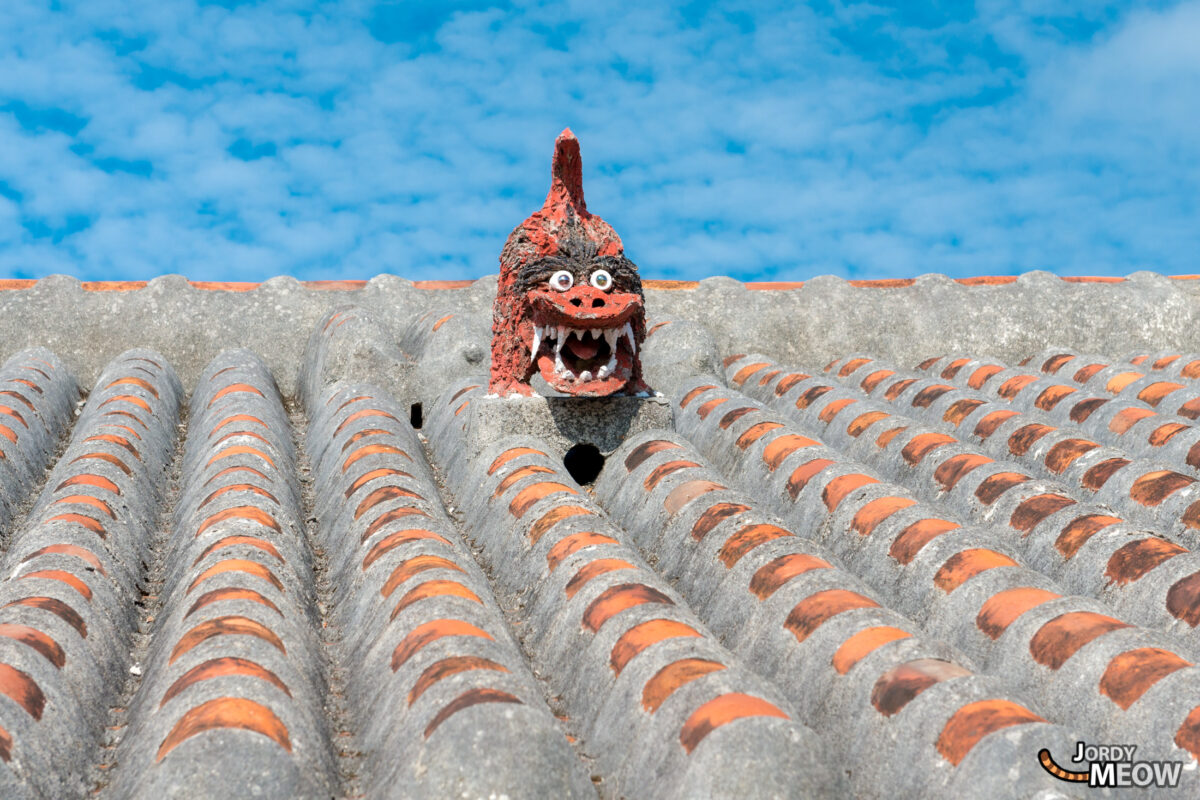 Taketomi owns a very quiet and relaxing beach. And it hides millions of little treasures. The sand is full of little stars!

Those little stars are in fact foraminifera exoskeleton. Foraminifera once lived in the sea around here. They are one of the oldest fossils known. If you want to see them, put the palm of your hands on the wet sand, raise it and look at it carefully: you should see a lot of little stars…

They are also sold in little jars but, unfortunately, buying those with contribute to their extinction. Please have a cold beer on the beach instead 🙂 This day will never be forgotten. It is my best memory in Okinawa and one of my best of my overall Japan experience.

Translated by Julien Wolff and corrected by Jordy Meow.

After showing respect to every monument in Pyongyang, it is now time to inspect some of the impressive facilities North Korea beholds.

Here we are in the middle of the mountains, in the Izu Peninsula. Under dense vegetation, there is a resort once popular with the Japanese from Fukuoka and Tokyo. This is the water park "Sports World".

Up early in the morning and departure for the Ibaraki prefecture. I rent a car there to travel with my friend Satoshi and see the haikyos. I have many haikyos on my list today, but I would mention the two most important...

Aragijima : The Island of Rice Paddies