Zamami, Aka & Love in Between

After visiting the urban side of Okinawa with Naha and Nago, here we are now in the ferry, on the way to Kerama Islands, more precisely Zamami and Aka Islands.

After visiting the urban side of Okinawa with Naha and Nago, here we are now in the ferry, on the way to Kerama Islands, more precisely Zamami and Aka Islands.

Reachable in roughly an hour by boat from Naha, they’re known for their beautiful beaches and their relaxing atmospheres. These islands only lives from tourism, so once again don’t expect bucolic places 😉 They’re resting destinations. One hour and 3,000Y later, we land on Zamami Island. Considering the price, you’d better avoid getting there and back in the same day !

We decide to stay 2 days and a night in the Kerama archipelago, sleeping at Yado Natura Inn, on Zamami Island. Nice welcoming, and very clean room. Of course, you’ll have to book before : there are plenty of inns in Okinawa but they’re booked real quick, even in November ! Our hosts take us at the ferry, and on our way I can see an another inn decorated with Ghibli characters. There are far more shisa decorating the houses’ fronts too. That’s what Zamami village looks like from above. In front, it’s Aka Island and in between there is Gahijima. We’re going to visit both of them. Zamami village doesn’t have a lot to see, but you can cross plenty of residents. The ubiquity of the mailman is amazing, wherever we go, he’s here ! It seems like the village has its own school. Supermarket is quite simple and reminds of the ones you can find in South-Eastern Asia. We find all-made Chanpuru, even SPAM ! Another leftover from World War II. As it was difficult to provide meat to all american soldiers, it was replaced by those SPAM cans… Then it was introduced to locals, product was really liked and is even now a part of Okinawa’s food. And here we are ! We found back our Ghibli friends, with Nemo as guest. 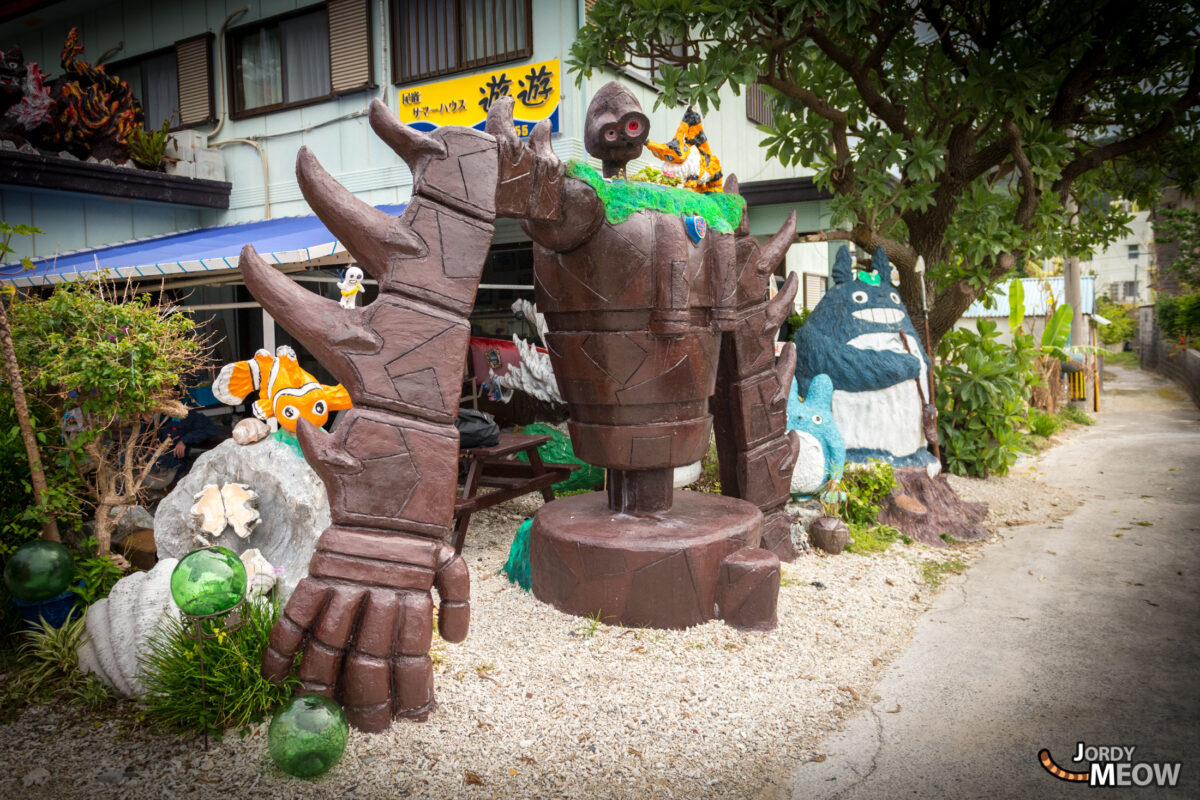 The owner worked very hard, reproducing the bust stop with Totoro. We only have to wait for the Nekobasu (cat-bus) with him ! We then rent bikes and go on exploring Zamami Island. Here is Zama Beach, very popular on summer but not the best one. On the way, we find this statue of a dog that reminds us of course Hachiko, the Shibuya’s celebrity. This one’s named Marylin, and people seems to take good care of him. But why ? We find those pineapple-looking fruits many times. They’re actually Adans. They’re eatable, but not eaten because they’re far from being delicious. Maybe with some SPAM…

We then arrive to Furuzamami Beach, the famest one of the island. Well-known for its turquoise colors, its transparent water and beauty of its seabed. I take the opportunity to buy a local-colored tea bottle at the vending machine, but it has the same taste that those we can find in Tokyo… 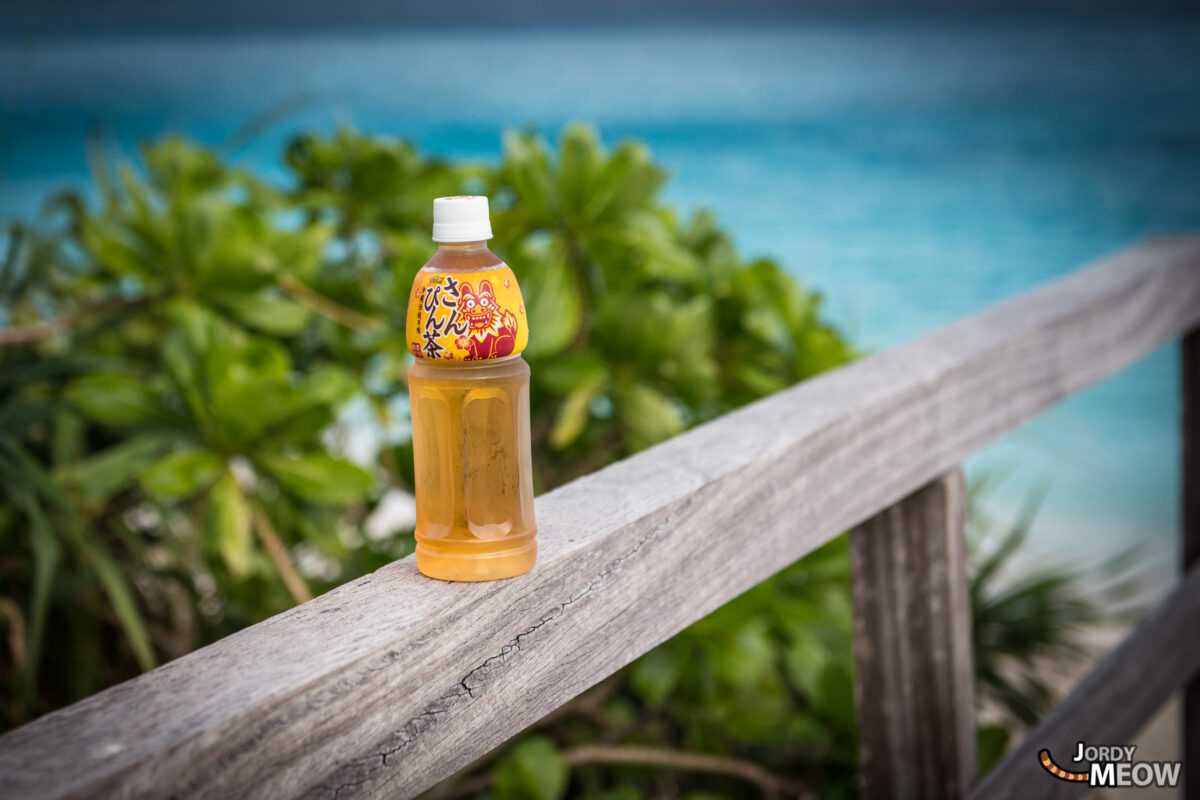 Here’s what Furuzamami Beach looks like. It’s a really beautiful beach, but what does this hideous building do in the background ? Isn’t this a shame ? It seems abandoned, its surroundings looks like a dump, and there are caged birds with cats spinning around them. Really far away from paradise. Japanese people doing a national favorite pastime : fishing. I have a lot of friends and collegues doing it, and I ask them everytime :”What do you do with all the fishes you got every week-end ?” and they always answer me : “Nothing, we put them back on the water afterwards”. Oh. But what’s the point then ? I don’t know if those fishes are going back to water, but they don’t seem eatable. Aspiring fishers has a teacher so I prefer not commenting on the fact that they won’t survive with so little water :p 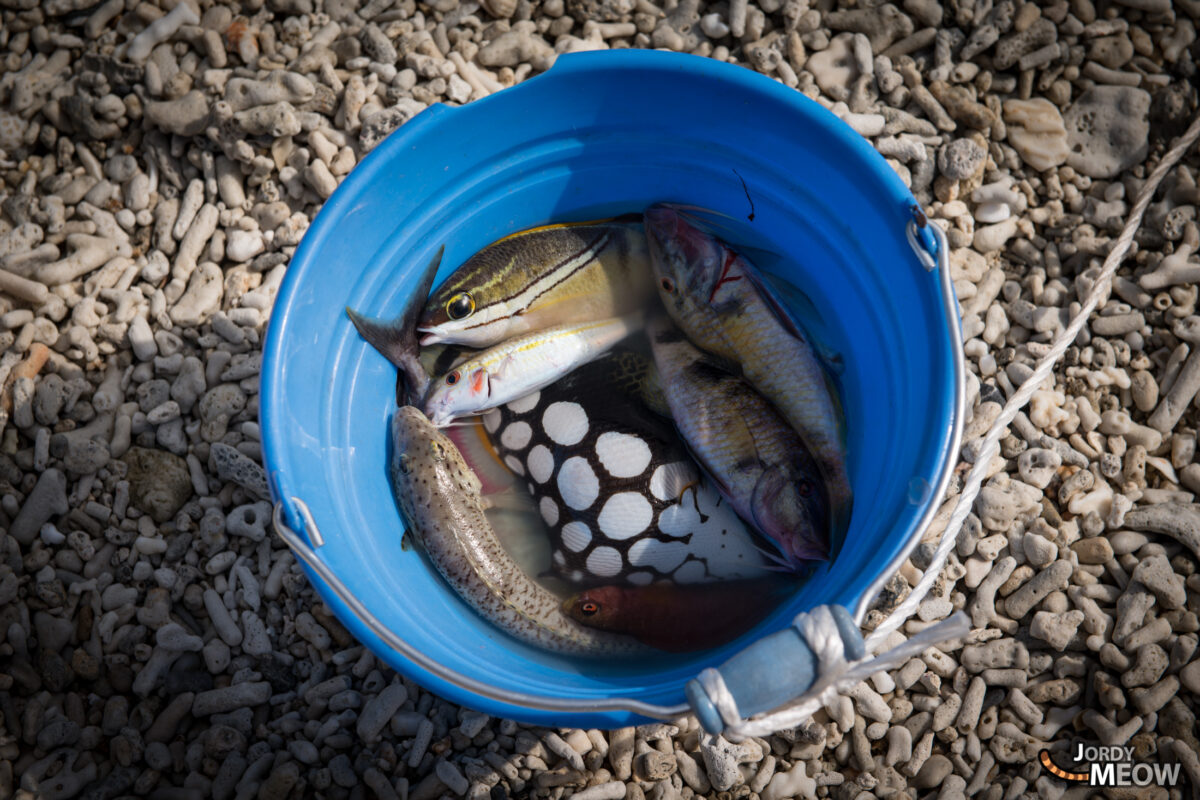 We get then to the center of the island where is an observatory. The hike is real short, but is it worthy ? Sure yes ! The view from above is wonderful ! We’re surrounded by many whitesand beaches, and nobody’s there ! We finally found our paradise. 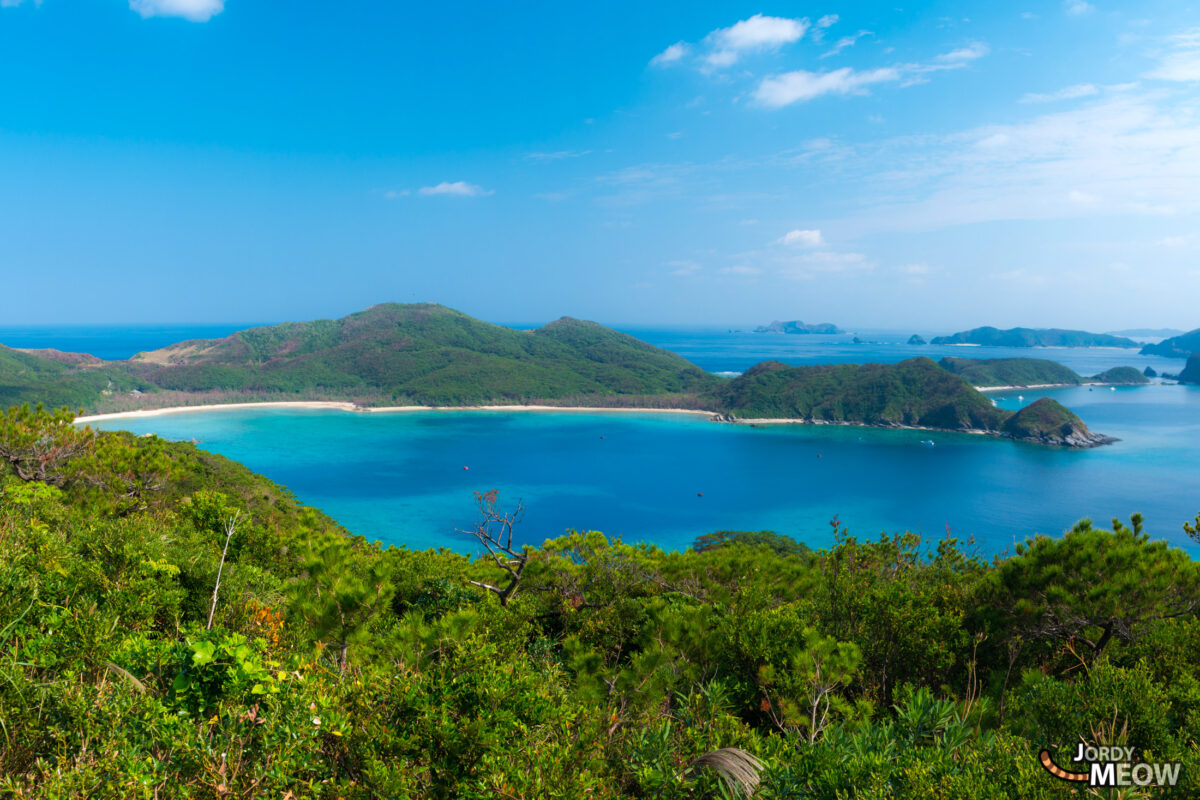 After a quite busy day, we go back to sleep at our guesthouse. The following morning, I decide we definately have to go to this small island between Zamami and Aka : Gaha.

It’s rather expensive to get there, because you have to pay a captain 1500Y per person even if it’s only a 5 minutes journey in boat. But it’d be a shame to ignore the visit of this lonely island… The island is a little one and is full of corals. We’re really alone here, it’s very relaxing. As there’s nothing special to do here… sunbath time ! Here’s our boat coming back. Zamami island is in the background. Close-up on our captain who really made his living today, but he’s really nice and fully earned it ! After Zamami Island, we get to Aka Island. Not as popular, but with a beautiful beach I definately want to go to.

We get to Aka Island and find ourselves in front of an another dog : Shiro-san. Two main islands, two dogs, there must be a link between both, isn’t it ? Daisuke gets back to his hometown in Zamami’s neighborhood with the idea of opening a guesthouse. It’s a very common business in Okinawa, and even non-locals decide to move to Okinawa to get started. Daisuke takes with him his dog Shiro, born in Tokyo. After a round of heartfelt reunion, Shiro meets Marylin on Zamami Island. Both dogs fall in love instantly, but Daisuke decide to build his guesthouse on Aka Island. So they get separated by 3.6 kilometers of ocean. Too bad !

But that doesn’t stop Shiro : he swims on a regular basis towards his love for the day. And he gets back home at night. This ritual becomes a national phenomenon, and tourists flood Zamami Island to welcome Shiro.

Situation gets complicated. Daisuke’s brother, a yakuza, comes to help but gets things worse. He decide to sell Shiro to a television channel, takes him to Naha where the dog gets attacked and hurted by an another one, which cancel the deal. The brother will soon after put the guesthouse on fire, not on purpose, by smoking at bed…

Meanwhile, Marylin dies of a disease. Shiro, still hurt on a leg, cross the sea a last time to realize this great misfortune by himslef. He lived on Aka Island, for its inhabitants and visitors took great care of him, until he joined Marylin 12 long years later, in 2000. Statues were erected this same year thanks to donations. The two dogs left 6 children. The movie “Maririn Ni Aitai” (I want to bang Marylin) retrace the story of both dogs and is the base of a polemic, for the dogs doesn’t seem to be taken good care of… plus the real Shiro plays his own character ! 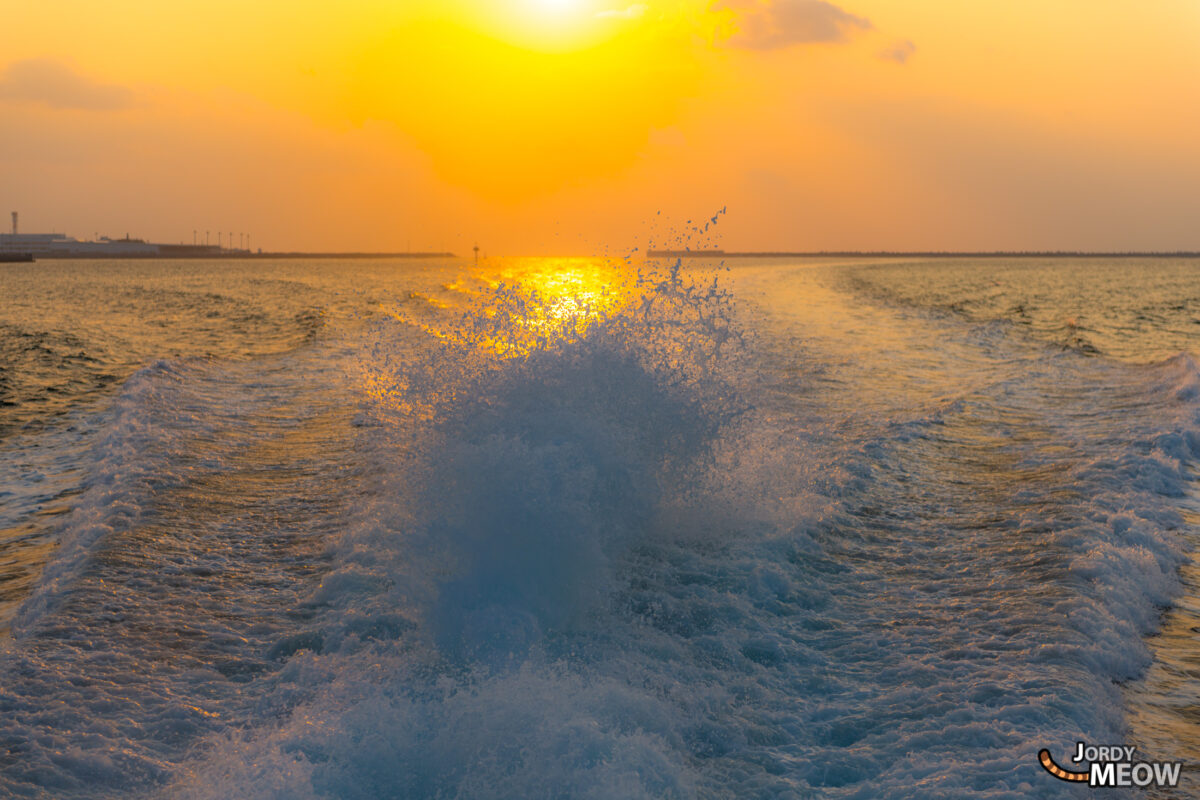 The story, quite sad when you think of it, made Kerama Islands very popular. To be honest, it’s deserved ! I’d gladly get back there to spend a little more time on the beaches and to make snorkeling. Plus it’s a trip you shouldn’t miss if you’re near the main Okinawa Island, which is far from having such paradise-like places. Now a question : The owners of both dogs has both has guesthouses on Zamami and Aka islands. Will you find their name and even more, their places ? :p

After showing respect to every monument in Pyongyang, it is now time to inspect some of the impressive facilities North Korea beholds.

Here we are in the middle of the mountains, in the Izu Peninsula. Under dense vegetation, there is a resort once popular with the Japanese from Fukuoka and Tokyo. This is the water park "Sports World".

Up early in the morning and departure for the Ibaraki prefecture. I rent a car there to travel with my friend Satoshi and see the haikyos. I have many haikyos on my list today, but I would mention the two most important...